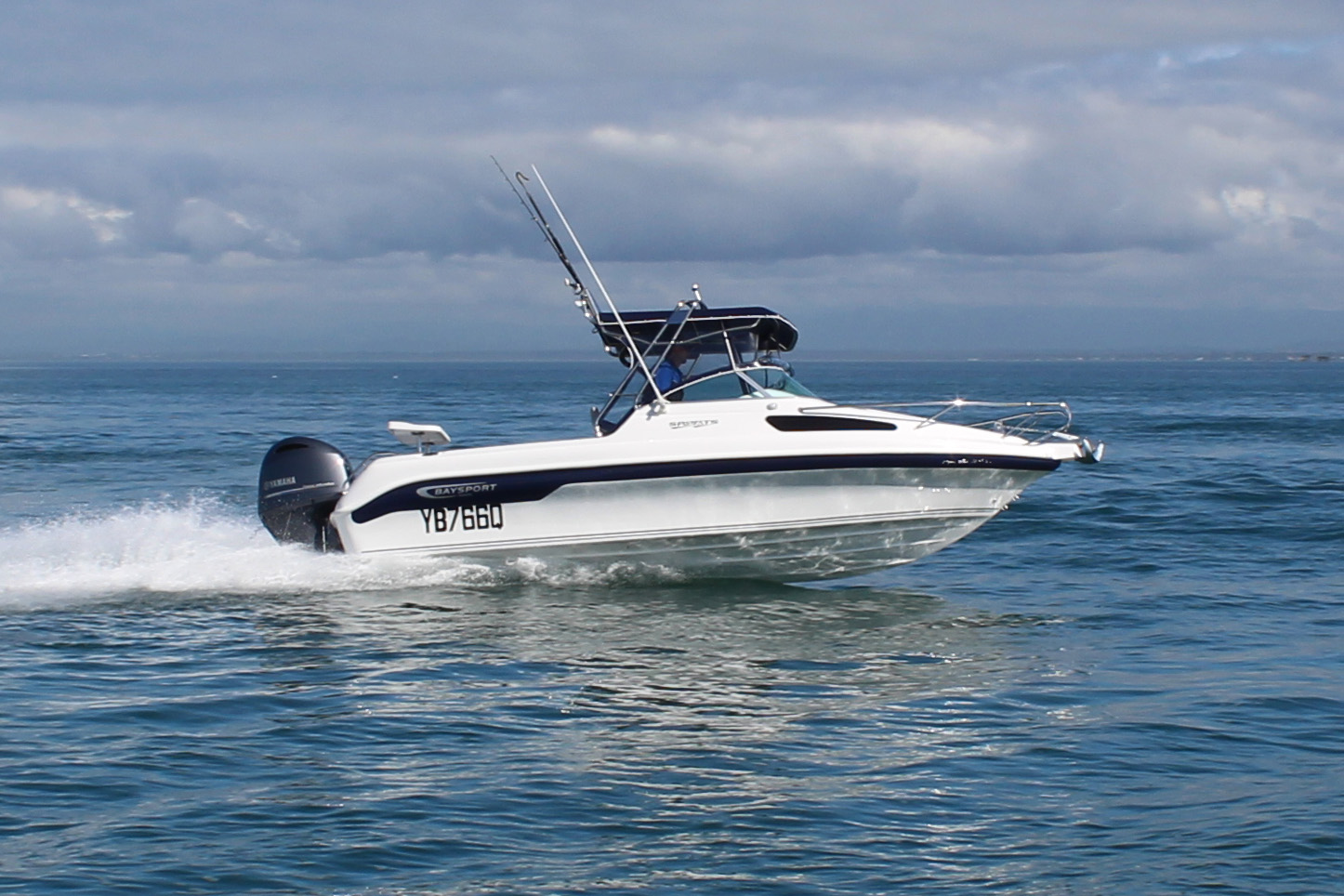 The value for money across all Baysport models is legendary. These affordable and tough hulls are built for Australian conditions and feature some innovative features such as the Hydralift Hull. This is a concave surface moulded into the bottom of the hull that sees them plane easier and therefore use less fuel. That can only be a good thing.
They also use a foam filled stringer system and a composite transom with several benefits. There is absolutely no chance of wood rot and the end result is a lighter boat lowering the engine size required to power the hull and again saving fuel.
Today there are several models in the Baysport line-up from a mid-size 5 metre boat through to the 6.4 metre beast we tested. All carry the same Baysport build features.

The 640 Deluxe is a large cuddy cabin style platform geared towards family and fishing. As such, it has a large live bait tank plumbed into the rear starboard corner of the transom. It’s large enough for larger bait that could easily see you chasing marlin offshore. On the opposite side is a handy walkway with transom door for easy access.

Keen anglers will like the fibreglass bait board and rigging station, an option fitted by Brisbane Yamaha, that smartly sits at the perfect height for easy use. The Baysport 640 Deluxe also includes a removable 2/3rds rear lounge that can be folded away when using the bait board. It is long enough to accommodate 2-3 passengers while underway and folds in a way that allows anglers to get their feet underneath it and stand close to the transom for support.

In fact, the fish-ability of the Baysport 640 Deluxe fisherman platform is better than most we’ve seen. The moulded fibreglass side pockets, that don’t extend all the way to the floor, allow anglers fishing from both sides of the boat to get close to the gunwale to brace themselves.

The floor in the cockpit is flat with the 170 litre underfloor fuel tank running through the centre. The fibreglass floor had been covered in polymer foam which offers excellent traction. It is also fuel and oil resistant and able to be hosed out after a day on the water.

Both helm seats are adjustable and come standard with a bolster. The passenger sits on a stainless-steel framework allowing an esky or similar, to be stowed underneath. The driver’s seat sits on a moulded fibreglass box with built in storage.

The passenger seat gets a handy grab bar, cup holder and side pocket. Down below in the cuddy cabin twin bunks run well forward. The bunk infill is standard in the Baysport 640 Deluxe. It can hide an optional porta toilet if overnight stays are on your radar. Along either side of the cabin, pockets will accommodate your bits and pieces. Between the helm seats, is more storage hidden by a lift up hatch or you can option up with a water tank and add a shower.

Over the top of the helm area is a magnificent stainless steel targa top. It has six rod holders across the back and is covered in black sunsafe material. An additional pull-out awning slides from the rear of the roof to extend over the cockpit. The entire canopy was made in house by the dealer, Brisbane Yamaha, and their trim department.

There’s not much missing in the Baysport 640 Deluxe.

The surprising thing about the 6.40 metre Baysport 640 Deluxe is the engine required to power it. The dealer has elected to fit a maximum of 175hp but they felt that the Yamaha F150 Four Stroke is the perfect unit to do the job.
It sits in their big in-line four cylinder range and comes with a high output alternator. This is crucial when you are looking at a craft with dual batteries and a host of modern electronics. It also uses Yamaha’s strong aluminium construction and has their impeccable finish. It’s incredibly quiet and when running has a great note. It sounds as if it could go forever.
The Baysport 640 Deluxe will reach speeds of around 75 kilometres per hour. At that speed it will sit at 5,500 rpm and burn 60 litres of fuel per hour. At a more sedate 4,000 rpm we were cruising at 42 kilometres per hour and burning 27 lph.

The driving position in the Baysport 640 Deluxe is exceptional. With the bolster on the helm chair, you can sit comfortably or fold it up and stand with plenty of room around the wheel.

It is not the most exhilarating of rides but it’s not meant to be. The 640 Deluxe is a family and fishing platform with all the comfort and quality of some considerably more expensive boats. It doesn’t leap onto the plane but gradually accelerates and gets there mightily quicker than some other hulls.

On the day of the boat test, the waters were hardly what you would call rough and the hull performed superbly. It turns on rails, doesn’t skip or bed in and powers through a corner without bogging down at all. The standard hydraulic steering is excellent making any manoeuvres a painless affair.

The hull has good chine that runs from near the bow to the transom. It’s not quite a reverse, but it does well to throw the spray well clear of the boat.

Overall, this is a pleasure to drive and feels like a much smaller boat than the 6.40 metres to control. Families will appreciate this aspect of the Baysport 640 Deluxe.

The Baysport 640 Deluxe is a reasonably heavy boat, with the total boat, motor and trailer weight in the vicinity of 1,750 kilograms. At that weight, it can be towed by a vehicle in the medium 4WD category like a Toyota Kluger. Any dual cab ute will be more than enough with most sitting around the 3,500 kilogram braked towing capacity.

When you consider value for money, the Baysport 640 Deluxe really sits in a class of its own. This large boat has everything and more you’d need for watersports, fishing or cruising. With the additional targa top, it really finishes off what is already a brilliant boat.